Before Covid, being able to smell and taste were two things most of us took for granted.  And even though, for many years prior to the outbreak of Covid, I had been studying how smell could support learning for pupils with profound and multiple learning disabilities (PMLD) I honestly hadn’t thought about the impact a loss of smell and taste would have on me!  My morning routine had included a little spray of my favourite perfume, a tasty mix of fruit, cereal and honey and a freshly brewed cup of coffee – all delightful! What a shock it was when I caught Covid and couldn’t smell anything!  It really made me think about the positive contribution smell and taste had made to my life and how important it must be for others, especially those who have profound sensory impairments – such as a loss of vision or hearing – and for whom there is a considerable reliance on their other functioning senses.

What my research uncovered was that, for pupils with PMLD, the use of smell was very much an under-researched, under-valued and under-developed area of study. There were very few texts that referred to the use of smell and very limited research within the field.  I did, however, find a small number of interesting studies that described the hypersensitivities to smell experienced by pupils with autism and how, for pupils with vision impairments, it supported communication and memory function.

During the study, I worked with 15 of my colleagues at Whitefield School and the parents and carers of a small group of seven pupils with PMLD.  I focused on a range of smells used within their daily routines and observed how the pupils responded to them.  There were a variety of responses including hand and arm movements (such as clapping) as well as eye and head movements.  The most frequent response was mouth and tongue movements – even amongst those pupils who could not eat orally and did not normally receive taste experiences.  This was a fascinating finding as it revealed not only the close link between smell and taste but it highlighted that we can actually smell through our mouths!

As the study progressed, I noticed how the pupils who were severely vision and physically impaired, needing support with eating and drinking, would voluntarily open their mouths and reach out for their food once it was placed close by.  This was also an important finding as it showed that the pupils were recognising and even anticipating their mealtime routines and able to communicate their desire to eat without any prompting.  Smell had clearly played a vital role in helping them better understand and gain information about what was happening in their immediate environment. It was also apparent that the pupils were recognising familiar people and places through their distinctive odours.

The outcome of this work has led to a much greater awareness of the use of smell in choice-making at mealtimes, as a way of understanding our pupils’ preferences and alerting us to their ability to recognise the many people, places and objects in their daily lives.  It is also a sign of how powerful smell is as a tool for learning especially for those pupils who have a significant number of sensory impairments such as those with PMLD.

This was only a small study and, as such, no generalisations to a wider population could be arrived at.  There was, however, the potential to uncover further ways for smell to support education and see how else the sense of smell can help these pupils in their daily lives.  And beyond smell, we can explore how other lesser known senses, such as temperature and pressure, can trigger responses in pupils with PMLD.  I look forward to discussing this with colleagues from across the SEND sector to shed light on how our sensory systems perform vital roles in establishing our pupils’ sense of self and their ability to interact with the world around them.

Head of the Professional Development and Outreach Services 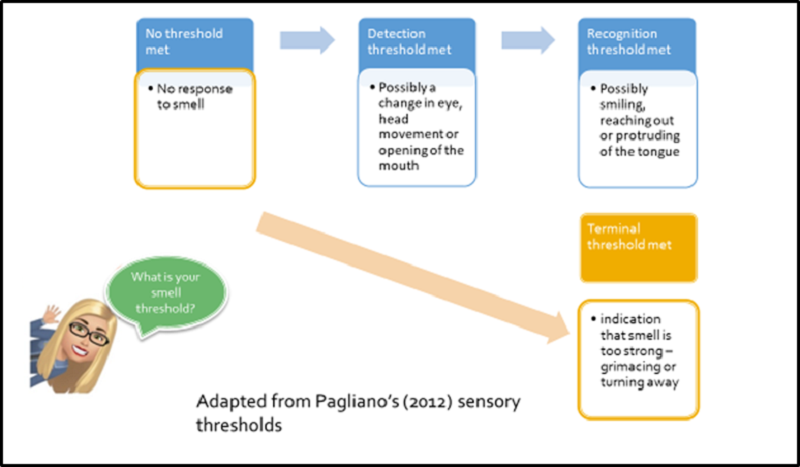